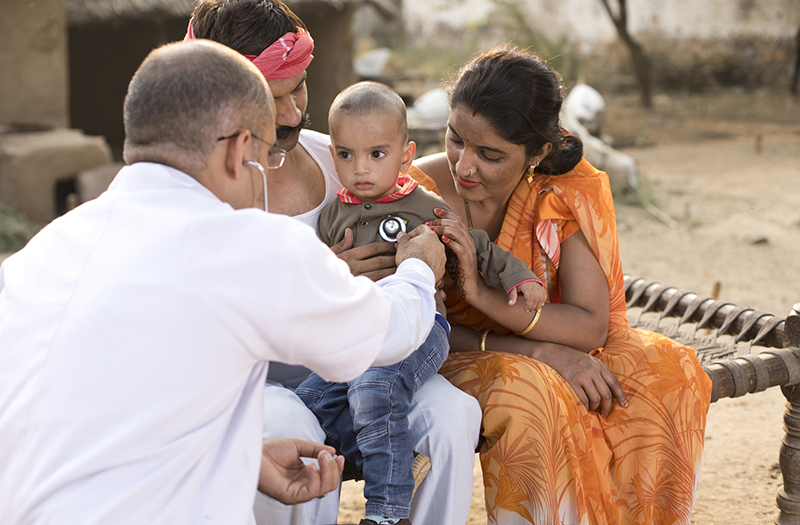 Late last month, I had to make an emergency trip overseas because my grandfather, who had just turned 85 years old, had suffered a heart attack during a train ride on his way to his farm. After an exhausting 27-hour journey, we reached Bhopal, India, from Los Angeles Airport (LAX). The next day, my grandfather was flown to Delhi, India, where he underwent a coronary angioplasty (a procedure in which a blocked artery is opened up) and stent insertion. The procedure was successful and our Diwali celebrations were filled with even more joy as we brought my grandpa back to his home. Shortly after his return, he received a text with information about his visit and the closest location where his labs could be performed for his follow-up care. We picked up his medications from the pharmacy, and I couldn’t stop marveling at how affordable these medications were. This experience was a refreshing change from the last time I observed the Indian healthcare system in 2010.

While known for many things, India is recognized for having the world’s second largest population with 1.339 billion people.1 Moreover, India has the world’s largest rural population and the greatest number of people in poverty (21.9 percent of the population).2,3 To put this into perspective, there are almost as many people living in poverty in India as the entire population of the United States. According to the Indian newspaper, The Economic Times, India’s government expenditure on health is currently just 1.15 percent of its gross domestic product (GDP) while the national health expenditure is 4 percent of the GDP.4 Between 1995 and 2014, approximately 7 percent of the population went into poverty each year because of high out-of-pocket medical payments.5 While India has both private and public health insurance systems, 62 percent of all healthcare costs in the nation were out-of-pocket in 2014.6 In the US, out-of-pocket spending comprised of 16 percent of the national healthcare spending in 2016.7 Moreover, between 2007 and 2017, the burden of disease was increasing for communicable, maternal, neonatal, nutritional, and non-communicable diseases.8  Thus, for the last two decades, healthcare access and cost were significant challenges for the Indian government and its people.

Shortly before the Affordable Care Act (ACA) was introduced in the US, the Indian government in 2008 implemented Rashtriya Swasthya Bima Yojana (RSBY) to provide coverage to Indian households living below the poverty line. The plan provided 30,000 rupees (~$416 US) to cover inpatient visits for participating hospitals. Like the ACA, the families would have to sign up in order to receive coverage. Unlike the ACA, however, there was no individual mandate, and only half of the target population enrolled. Moreover, reports indicated that because the bulk of the coverage was for inpatient visits, the plan did not actually lift the burden of medical costs which are predominantly from out-of-pocket costs from outpatient visits. Around the same time, India was creating the healthcare infrastructure and building the necessary workforce.9

To address the issues that arose from the 2008 efforts, India’s Prime Minister Narendra Modi launched a health coverage program called Ayushman Bharat for 110 million low-income households (approximately 500 million people) last year. This government-sponsored health insurance will automatically enroll these families and cover up to 500,000 rupees (~$6,947 US), including out-of-pocket expenses. It will apply to both inpatient and outpatient secondary or tertiary care (more specialized and intensive care) at any participating private or public hospital. The second part of this plan includes the creation of 150,000 Health and Wellness Centers, specifically in rural areas, to expand primary care services. These Health and Wellness Centers will provide free medicines, diagnostic assessments, care for communicable diseases, and maternal and child health services.10 Finally, the Public Health Foundation of India is working to deliver test kits to rural areas that allow for families to run over 33 different tests and receive instant results. These results can then be linked to the individual’s chart through their phones and delivered to the nearest hospital so that the patient information can be processed before a patient even walks into the hospital.11 There will be many challenges ahead including covering the cost of such a program and the risk of overutilization; therefore, the government will have to be proactive in finding solutions to potential problems to ensure this program’s success.

On my plane ride home, the American news channels were flashing on various passenger screens headlines showing what some of our Congressional representatives recently introduced as their healthcare plan: Medicare for All, Medicare for All Who Want It, the State-Based Universal Health Care Act, Public Option, etc. It occurred to me that we are seeing a healthcare revolution in our vastly different societies; we are observing a similar shift in mindset and an understanding that universal coverage is no longer just a luxury, but a basic need that must be met. As we continue having these discussions here in the US, we should look to see how other countries are achieving universal coverage and access. I look forward to seeing the progress that India makes in its quest for universal healthcare.