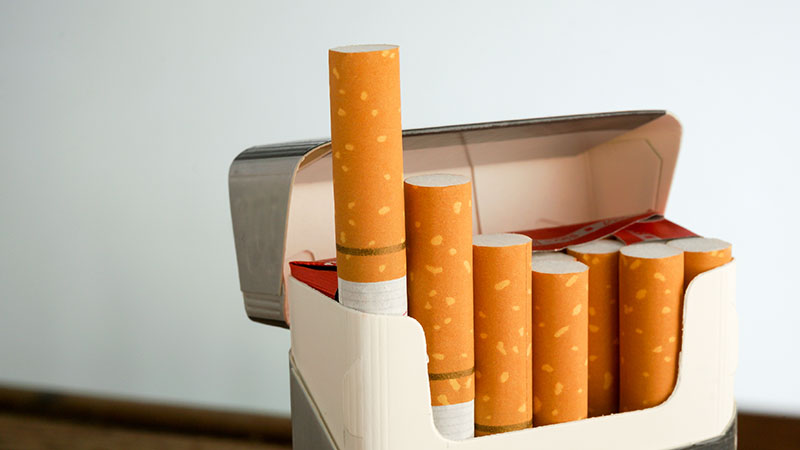 Signed into law in 2009, the Family Smoking Prevention and Tobacco Control Act (“The Act”) gave the Food and Drug Administration (FDA) the power to regulate tobacco products.1 Almost nine years later, on March 15, 2018, the Food and Drug Administration (FDA) released a statement asking for public comments in helping set the standard nicotine amount to “minimally or non-addictive levels.”2 Nicotine is the addictive component of cigarettes that reinforces and sustains cigarette smoking, but it is actually the tar in cigarettes that eventually causes the harmful health conditions.3 Reducing the nicotine could potentially end cigarette smoking in the United States by decreasing the number of people addicted to it.

So, how did we get to this point of victory over Big Tobacco?

Cigarette use gained momentum around the 1940s as men headed to war and women began to work. Cigarette companies used to provide cigarettes in the military rations. Smoking was a trend that spread like wildfire. By the 1950s, close to 47 percent of Americans were smoking despite the emergence of multiple studies indicating a potential link between smoking and lung cancer. Around this time, the Federal Trade Commission released the statement that smoking advertisements claiming that cigarettes provide health benefits are deceptive. In fact, at the time, nearly 50 percent of physicians were smoking cigarettes, and some were even prescribing cigarettes to aid in digestion. Frantically, the cigarette companies responded to the possible regulation measures by creating cigarette filters, which they claimed would reduce nicotine and tar inhalation. With an estimated 4,336 cigarettes per capita per year (equivalent to every person smoking more than one pack every two days), smoking reached its peak in the 1960s and filtered cigarettes made up nearly two-thirds of all cigarette sales.3,4,5,6

Public opinion shifted, and the decline in smoking started with the pivotal Surgeon General’s (SG) Report in 1964, which explicitly stated that excessive smoking causes lung cancer. A year later, the Federal Cigarette Labeling and Advertising Act was passed, requiring the SG warning on all cigarette packs. Four years later, Congress banned cigarette companies from advertising with the passage of the Public Health Cigarette Smoking Act. In the 1980s, nicotine gum to help smokers wean off of tobacco products received FDA approval as it was later proven that nicotine was an addictive drug. The next 38 years would be marked with state bans on smoking in public areas, bans on smoking in airlines, multiple lawsuits against tobacco companies for harming the public, public stigmatization of smokers, a battle to gain control over the regulation of these products, and declining numbers of smokers in the United States. 5,6,7,8

The potential effects of a nicotine reduction strategy

With an estimated 37.8 million adults still smoking in the United States, the FDA is trying to understand what will happen if they reduce the nicotine content and by how much they should do so.9 Let’s explore some potential consequences and responses to those concerns:

To benefit from the effects of a nicotine-reduction policy, the FDA will have to create additional policies to help the public with the transition. As mentioned previously, taxes on alternative nicotine delivery systems will be vital in dissuading people from compensating for the lower nicotine content. Moreover, the government should understand that individual variations exist in their sensitivity to certain doses and resulting effects. So far, studies have had relatively large sample sizes but they can never capture the full range of impact on individuals. Thus, the government will have to ensure that smokers have access to mental health facilities, smoking cessation programs, and other interventions at affordable cost.

Finally, while the FDA commissioner’s primary intention to prevent the youth from getting addicted to smoking is commendable, this effort may not stop them from getting addicted. The young people of today start on e-cigarettes and other nicotine delivery systems (such as JUULs). Because these products are designed to look like regular school supplies and do not create the pungent smell that cigarettes do, they are attracting students at alarming rates.18 The infamous cigarette companies that the FDA spent years taking down are producing many of these new products.

Thus, as we focus on tackling the beast in front of us, another rises from behind.