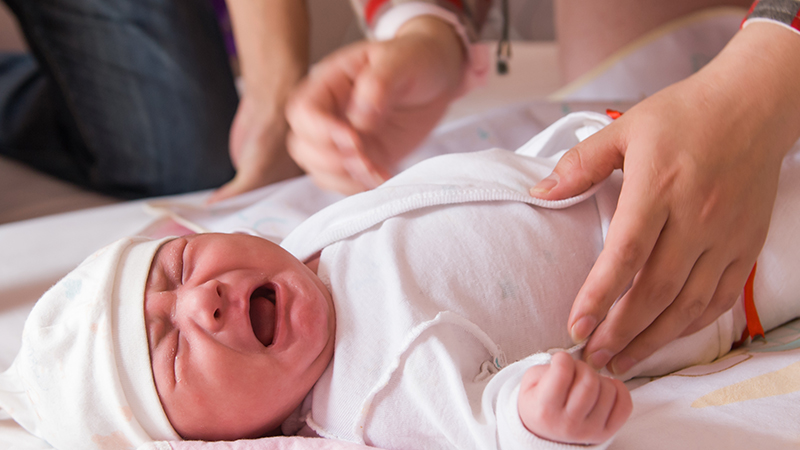 At the very moment a baby is born, one of the first things that the parents listen for is that shrieking noise that fills them with relief (initially). A baby may cry for many reasons including a physiological response to the pressure on the lungs they never used before or the fatigue of the process of coming out of the womb.1-3 There are some babies, however, that cry because they are experiencing neonatal abstinence syndrome (NAS). In other words, the babies are experiencing withdrawal from opioids that they were exposed to in the womb. Typically, a child with NAS is separated from the mother and taken to the neonatal intensive care unit (NICU) where he/she is initially given morphine for the pain and then, over the course of multiple weeks, is weaned off of it.4,5 According to the National Institute on Drug Abuse, NAS is on the rise and “every 25 minutes, 1 baby is born suffering from opiate withdrawal.”6

When a parent leaves his/her child unattended in a vehicle or provides minors with alcohol, he/she can face severe punishments including imprisonment for several years depending on the state.7 Should we treat the mother who took opioids during her pregnancy in the same way? Do we separate her from her baby?

According to the Guttmacher Institute, there are three states where women can be institutionalized at a psychiatric facility for taking opioids during pregnancy: Minnesota, South Dakota, and Wisconsin. Including these three states, there are 22 states (and Washington DC) that consider substance-use during pregnancy to be a form of child abuse which is grounds for termination of parental rights.8 Nearly one-quarter of the states have mandatory reporting laws for suspected drug abuse, and nineteen states have programs designed to help pregnant women who have substance-abuse issues. Some states that do not currently have such laws are headed in that direction.9 Until 2016, Tennessee had a law that allowed for a woman to be prosecuted if her baby was born with NAS.10

There are important dynamics to consider, however, when making such laws, and a paintbrush approach can create a slew of problems. A Reuters report uncovered 110 instances between 2010 and 2015 in which NAS babies died from preventable deaths after being sent home. In many of these cases, the mothers or other relatives were high and killed their babies. In other cases, the babies died from swallowing pills that were lying around. The report also indicated that almost 70 percent of the time, social services did not take proper action despite being notified.11 When considering these tragic cases, the laws do not seem to be comprehensive enough! At the same time, however, the laws could deter women from seeking treatment or may even lead to their terminating their pregnancy due to fear of stigmatization or punishment.

There are additional factors to consider as well. What about a pregnant woman who was taking opioids to treat pain and slipped into addiction without having any history of it in the past? Or even more perplexing, what about a mother who was taking buprenorphine as part of a drug treatment program during her pregnancy? The New York Times reported on such a mother who was kept away from her baby for multiple days at a time while the baby was being hospitalized because the mother was not allowed to be alone with her child.12

To complicate matters, physicians are advocating for a different approach. They propose that babies who have NAS should not be separated from their mothers but kept with them while being treated in the hospital, not in NICUs but in quiet environments where the baby can bond with the mother and feel nurtured. Studies have shown that when kept with their mothers and given breastmilk, these babies can recover in as little as 6 days compared to the average 22 days of NICU hospitalization and morphine.4,13 Of note, the physicians are advocating for faster recovery times that are in the best interest of the child and not for discharging the child to an unsafe environment.

What we need to protect these vulnerable and innocent human beings are comprehensive and uniform laws that are based on the best interest of the newborns. Mandatory reporting should be required in every state so that authorities are aware that there could be potential issues. Social services should allow mothers and babies to stay together until the time the mother is discharged. After this time, there should be a thorough evaluation process to ensure that the mother is not a threat to her baby during the time the baby is in the hospital. Being able to keep the mother and baby together should speed the recovery process for babies and cut down on medical costs from longer stays. Around this time, the case workers should also assess the mother’s home to ensure that the baby will be returning to a safe environment. Lawmakers in Kentucky are considering a provision that would remove babies from their mothers after the hospitalization if the mothers are not enrolled in a drug rehabilitation program.9 It would be interesting to compare states that offer the optional targeted treatment program and states that do not, as well as comparing whether a substance abuse pregnancy is considered child abuse within those states. The data is sparse, however, and not all facilities collect it.5 Policies and practices must carefully balance the need to keep the newborn with the mother for faster recovery from NAS with the need to safeguard the wellbeing of the baby beyond the initial phase of the baby’s life.